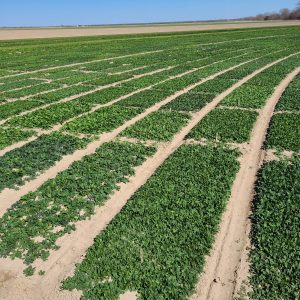 Kayla had two field trials planted at Tiro Tres Farms that were on display at the field day, including a spinach cultivar trial with three replicate plots of each of 87 commercial cultivars planted in baby leaf configuration, and a spinach accession trial in which 333 Plant Introduction lines from the USDA National Plant Germplasm System were planted. The plants in each trial were inoculated with Texas isolates of Stemphylium vesicarium that Kayla grew at our center and shipped to Texas (1,800 petri plates!) to evaluate the degree of resistance or susceptibility of each entry to Stemphylium leaf spot.

Kayla flew to Texas in December to help plant the baby leaf cultivar trial. Lindsey du Toit (Kayla’s advisor), Larry Stein (Texas A&M AgriLife Extension Associate Director), and Jim Correll (University of Arkansas professor of plant pathology) helped Kayla rate the plots for severity of Stemphylium leaf spot as well as white rust (latter disease resulted from natural infection on the farm) the day prior to the Texas Spinach Field Day. This is the second year Kayla has had field trials in Texas and shared results of her research project at the Texas Spinach Field Day.

Kayla’s PhD project is funded, in part, by the Texas Wintergarden Spinach Producers’ Board as well as the Puget Sound Seed Growers’ Association (through the Northwest Agricultural Research Foundation) and the Washington State Commission for Pesticide Registration. Her research has had very significant beneficial impact on the ability of spinach growers in Texas and other states to manage Stemphylium leaf spot more effectively.